CAPTURES & KILLINGS : A BITTERSWEET START TO 2013 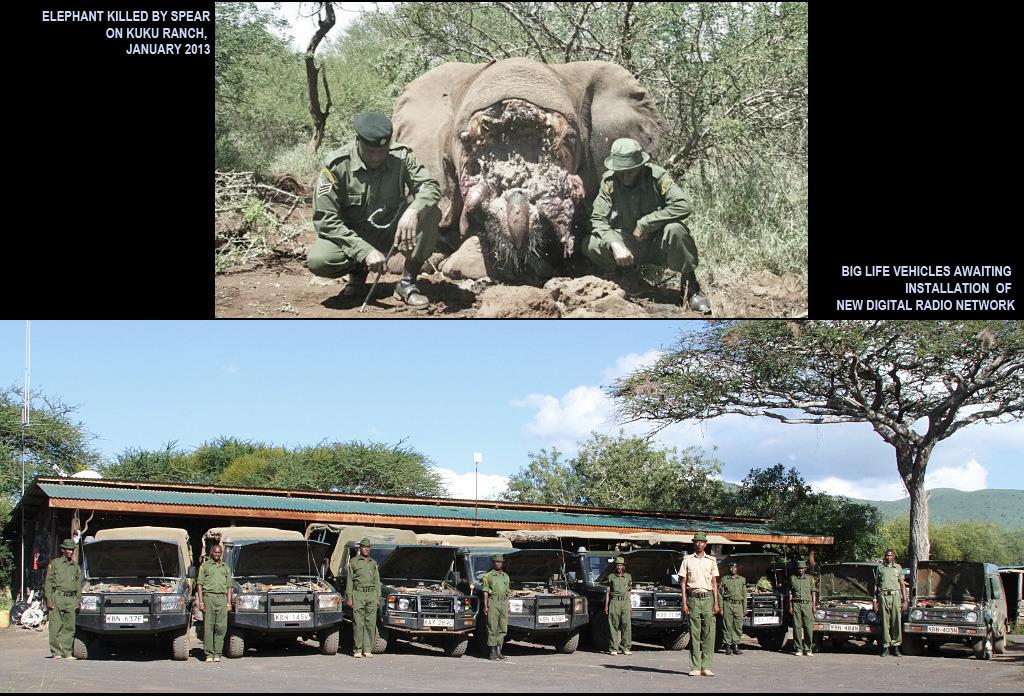 The first three weeks of 2013 did not bode well for wildlife in East Africa, and have confirmed our fears and the challenges that lay ahead.

On January12, we received a radio message from Maasai Wilderness Conservation Trust that two elephants had been killed very close to our common border of operations, and requested support.

Thankfully, this report turned into only one elephant being confirmed killed, a young bull, who had been speared in a manner that I have never seen before:
he fell to one spear that penetrated his skull and into the brain, the work of a true professional.

Luck was on the side of the poachers, as it rained the evening of the kill, which obliterated the poachers’ tracks, leaving us blind with no leads to follow. From now on our only chance of will be a lucky break from within our informer network to lead us to those responsible.

The only positive aspect that I saw come out of this mindless tragedy was the co-operation that transpired between those of us who are endeavoring to stop this slaughter:
When I arrived at the scene there where rangers and a vehicle from MWCT, two teams of Big life rangers with two cars, and KWS were there as well with a fully armed section of men. They may have got away with this one, but the word will be out that pickings aren't easy in this neck of the woods.

While this was happening, the now much publicized tragedy took place in Tsavo National Park, where a family of eleven elephants were massacred.

Meanwhile, the Big Life outpost at Rombo had a breakthrough. Informers passed information that a poaching gang were moving in from Tanzania. The rangers set up a cut-off ambush and arrested three poachers with all their paraphernalia, spot lights, slashers. It’s so rewarding for all concerned to catch poachers BEFORE the kill.

Next…. A poacher we arrested last year was promised rewards if he gave us information, and joined Big Life when he completed his jail term. Just before christmas he came to us, having served his jail time. He said he was ready to change to change sides. So we said prove yourself, give us some information. Sure enough, it was not long before he called and said he knew someone who was selling a leopard skin and poison, and that he would lead us to the suspect. We linked him to Kenya Wildlife Service undercover unit, who orchestrated a textbook sting operation, and arrested the seller.

Mobilizing all the necessary men and equipment to react to these situations takes time, logistics and planning.  Here is a picture of the Big Life vehicles taken yesterday when they were bought in to headquarters for inspection and preparation for the installation of our new radio network. Thanks again to all of you who have made this possible.