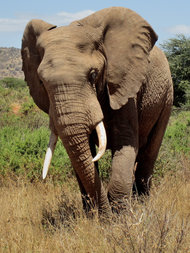 ARCHER’S POST, KENYA — The call comes in camp at Sunday breakfast. David Daballen answers it, walking from the table as he talks. David works for Save the Elephants here in Kenya. Moments later he returns, announcing, “Another elephant just discovered killed, right across the river in Buffalo Springs, right inside the reserve, right off the road.”

That’s shocking. No elephant has till now been killed so deep inside the reserve, so near tourist lodges. “It’s never been worse,” David says. “We’re going in the wrong direction.”

Surging demand for ivory in China has been well publicized. But the publicity has overlooked the cause: The same international body that enacted a 1990 global ivory ban allowed China in 2008 to import ivory. This catastrophic reversal can be counted in carcasses — elephant and human.