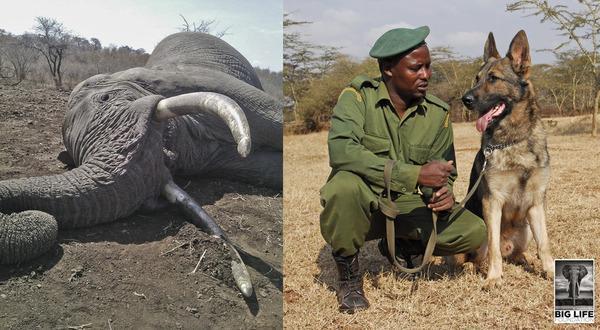 Three days ago, just after nightfall, the crack of gunfire echoed across the plains.  Somewhere, another massive bull elephant died for its tusks.

Rangers stationed at the nearby Manyara Ranch, a community-based conservancy managed by the African Wildlife Foundation (AWF), received a call from community informants. Within a half hour, rangers had arrived at the base of the mountains and had no choice but to pursue the case on foot.

Soon thereafter, rangers from Tanzania National Parks (TANAPA) and the Wildlife Division’s anti-poaching unit (KDU) joined the operation. But in the dark of night, they could find little among the forested hills.

By 5:00am, the pursuit resumed and ran into a bit of luck. The community informants directed the team to the spot where they had encountered a dead elephant that morning. Due to the rapid reaction of the Manyara Ranch team the previous night, the poachers hadn’t even have time to remove the tusks.

The elephant, a well-known, long time resident in Tarangire National Park and its surroundings, met his end via a single bullet fired by a seemingly veteran poacher. The elephant was nearly 50 years of age. His tusks, the sole reason for his murder, were significant : about 1.7 meters (5 feet, 7 inches) long and weighed an estimated 60 kilos (132 pounds).

For other anti-poaching operations, that might have been the end of the story. Criminals escaped. Scene investigated. Report written and filed away. But that’s not how it went down this time.

The Big Life Foundation Tracker Dog Unit, a special team of canines and their handlers headquartered in Manyara Ranch and also in West Kilimanjaro were called in.

Enter Rocky and his new sidekick, Rosdas. It didn’t take long before the German shepherd mixed breeds picked up the human scents from footprints near the elephant’s carcass. It seemed multiple people had been there the previous night before the rangers had given chase. A new kind of hunt had begun.

For the rest of the day, the dogs followed the scent trail through the foothills and scrublands. First Rocky took the lead but eventually tired after the relentless pursuit wore on for more than five hours. His backup came to the rescue.

This had been the first time Rosdas had joined a Big Life Tracker Dog operation, and right from the outset, his months of training bore fruit.

The scent led him to the main highway heading to a town and directly to the home of a local resident. The man admitted that two men had come in the middle of the night requesting their cell phones to be charged.

It was this information then led to the capture of the two suspects.
(At this time, additional information cannot be released, as it could jeopardize the ongoing investigation.)

Already, though, the operation has shown how a number of committed groups, TANAPA, KDU, NGOs, and communities, can work together and combine their expertise and manpower to produce results.

Let us just hope that hard evidence will be uncovered this time and poachers will be charged and convicted.

Big Life’s tracker dog unit in Tanzania thus continues to be an incredibly effective anti-poaching force, one of the single best uses of donor money. Not just because they are so good at tracking down the poachers, but also as a deterrent - because poachers in the region know that these dogs have that ability to track them down many miles away. It just becomes too risky for many to attempt to kill.

The dogs and their handlers are now being requested and deployed in the Serengeti, Tarangire and Manyara National Parks as well as the West Kilimanjaro original headquarters.

to help continue the funding of Big Life’s tracker dogs.