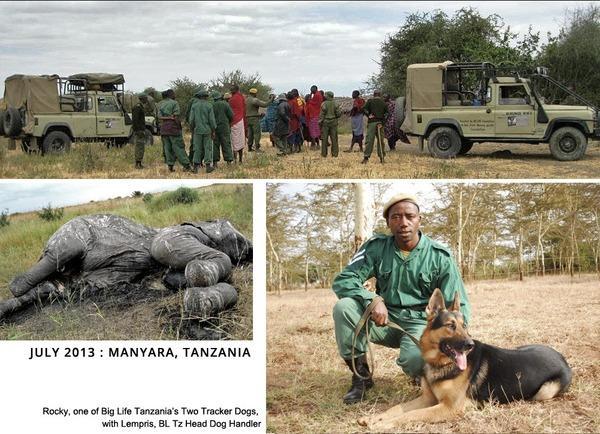 Thanks to donor funding, Big Life recently started to help protect the wildlife of the Manyara/Tarangire area. One afternoon two weeks ago, Big Life Tanzania was called by Manyara Ranch, a community conservancy in the area.

Gunshots had been heard the previous night, and that morning, the carcass of an elephant had been discovered, its tusks removed.

At the site of the killed elephant, John Magembe, Big Life Tanzania’s platoon commander, saw that the poachers’ tracks were still reasonably fresh. He called for Big Life Tanzania's Dog Unit to get out ASAP from their base in West Kilimanjaro.  A few hours drive away, they arrived that evening, too late to start tracking.

At dawn the next morning, the dog unit arrived at the carcass.  Jerry, one of Big Life's first German shepherd tracker dogs, picked up the poacher’s scent. He led the team through the bush for about six kilometers, heading in the direction of a Maasai boma (homestead).

John called the police, and once they met up, Jerry led the way on to the boma. The dog unit’s other German Shepherd, Rocky, took over the tracking at this point, to give Jerry a rest. Rocky took the team into the boma and all the way to one house within the boma.

By this time, a large crowd had gathered. Big Life’s head dog handler, Lempris, told the women and children to separate from the men. With police help, the dog unit arranged a line-up of all the men.

Rocky went through the line and picked out one man. It was the owner of the very house that Rocky had identified at the start.

Many of the crowd did not believe the dog, and an argument broke out. So another line-up was arranged. And once again, Rocky went and picked out the same man. They even did a third line up, to convince the community that they did actually identify the poacher. The suspected poacher was then put under police arrest.

That the poacher responsible for the murder of an elephant was tracked down two days afterwards and arrested because of Big Life’s tracker dogs - the only dogs being used for wildlife protection in Tanzania - sends a strong message of deterrence to the local communities. The reputation of these dogs will spread far and wide in the area now that their effectiveness has been proven.

Please help support Big Life’s fledgling Tanragire/Manyara operation, and the dog unit situated at the center of its main operations in West Kilimanjaro, at www.biglife.org.