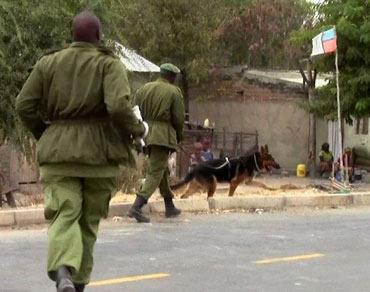 After hearing about the Big Life dog unit, the Chief Park Warden of Tarangire National Park called for their support in October 2012.  An elephant had been shot in Tarangire and the poachers had taken off with the ivory. The park terrain made it difficult to follow the tracks and they needed dogs.

The dog team was based in West Kilimanjaro, so they did not get there until the late afternoon. The dog team set off on the trail, the tracks winding out and back into the park and then out again towards the villages. Finally, the dogs lost the scent due to large herds of cattle crossing the paths of the poacher’s tracks. It was getting dark and it was time to call for rest.

Early the next morning the dogs set off again, but this time the strategy was to pass by every village, and, through a process of elimination, reduce the possible options.

In each village, the young men were lined up and by smelling their ‘scent’,  a dog checked to see if any of them were the poachers. This process is a gentle way of ‘interrogation’. With all the villages checked and nothing found, the dogs went to the town of Makuyuni and started to sweep through.

This is where they picked up the scent again and followed it to a certain place, where again, the tracks disappeared. However it provided information that the poachers had boarded a car at a certain place, and this helped narrow down the options.

Within half an hour, a vehicle was picked up with three men who were not from the area and had been seen coming from the direction of the park. The dogs were called in on a line-up. Rocky picked both men out and then did not want to leave them. He knew that this was his prize for coming.

For a long track such as this one, taking place over a few days and using two dogs, the team uses a method to keep the scent.  In this case, a knife was found early on that had been dropped by the poachers, and so it was handled and stored carefully to retain the scent.  This knife was used repeatedly to remind the dogs of the scent that they were looking for.

The Chief Park Warden for Lake Manyara Park called Big Life for help. He needed the dogs to follow-up on a poached elephant. The dog team set off from their Kilimanjaro post to Manyara, arriving late at night.

In the morning, they set off with the national park rangers and the Chief Park Warden to where the elephant had been found. Unfortunately, it had rained heavily after the elephant died, and the Big Life dog unit explained that because of this, they could not pick up a track and were unable to help in this particular incident.

A radio message then came through with news that another park’s team had found a set of tracks, presumed to be that of a poacher, and the team decided this would be a good opportunity to give the Tanzania National parks some experience of how the dogs operated.  Several rangers gathered and set off following Rocky.

Rocky, who loves water, took them through marshes, pools of water and swamps, and after six hours of tracking, they finally ended up near a small village.

Since they were now on a clear road, the team changed dogs and Jerry took over. Emmanuel, the dog handler,  placed a small piece of gauze on the footprint at the start of the track and then stored the gauze in a Ziploc bag. He gave Jerry a quick sniff of the bag with the gauze and then he was off pulling Emmanuel behind him.

Just around the corner he stopped outside a house. Lucky Jerry had taken over in the last 100m of the  six-hour track and arrived at the poacher’s house!

The police arrived quickly and forced entry into the house to find a huge pile of illegal fishing nets. The police later arrested the man. Although this was only a fish poacher, the real success was the opportunity to show the Lake Manyara Park rangers the exceptional qualities of a good dog team.

The following day, the  Chief Park Warden called all of the park patrol rangers and police in the area together where they held a training workshop on crime scene management and tracker dogs’ protocols. 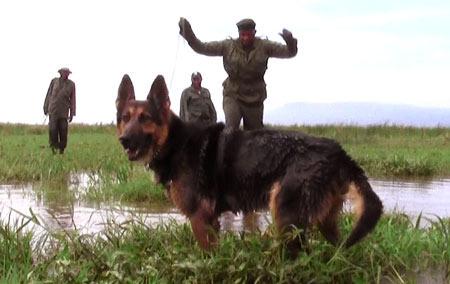 Tarangire Parks called Big Life Dog Unit for help after a young elephant had been killed near the park. The dog team set off to the crime scene. Jerry was harnessed and set off at a fast pace with the tracks still relatively fresh.

They followed the trail and found where the poachers had slept in the early hours of the morning. The trail led them to a busy village on market day, but the tracks were subsequently lost due to the mass of people and tracks on the ground.

However, the dogs provided key information in tracking them to the village. By using information of the route the poachers had taken and some intelligence gathering, the Parks received information that the poachers were in Babati town. They know their names and are following up to find out their current whereabouts.

Some local people in the NCA heard a gunshot in the forest and reported this to the rangers of the Ngorongoro Conservation Area. The rangers set off to investigate, fearing it could be another ivory strike on the huge tuskers of the NCA.

After two days of searching, they finally found a young bull elephant of just five years old on the edge of the forest with the ivory hacked out and removed.

The NCA called Big Life's Dog Unit, which set of to Ngorongoro, arriving in the late evening, too late to start. Early the next day the team set off to find the elephant, which had been dead for at least four days.

Jerry’s incredible nose still picked up the scent after four days. The track led them past where the poachers had cleaned the tusks and packed them, but unfortunately took straight to the road where the poachers had used a vehicle to escape. The team packed up for the day and gave the dogs a well deserved rest.

The next morning, the NCA security rangers received information that a known poacher was in the area and they decided to ask the poacher to join a line up to see if he was responsible. The dogs were taken to the line up to identify him as the one responsible from the scent, but this time it was not him, and the others had escaped.