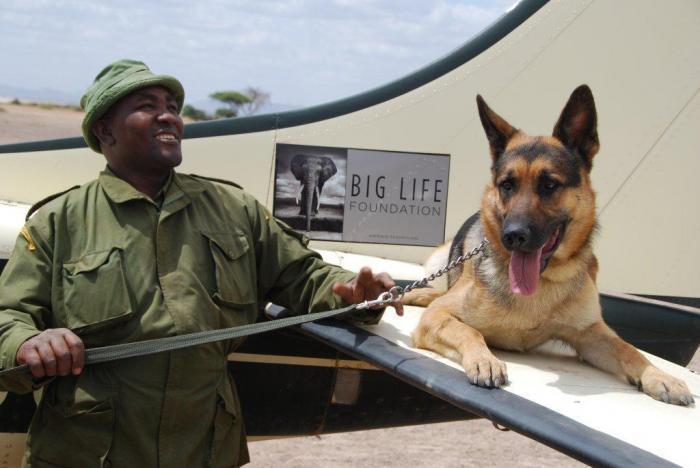 One of the most effective tools to an anti-poaching strategy is to deter poachers from even coming into an area. In this regard, there is no tool more effective than tracker dogs. Even if the poachers are not ambushed or stopped before the crime, they will almost definitely be caught with dogs after the crime. They cannot get away.

Dogs can track this trail from where poachers have killed up to one day past the event, and lead the team to the door of the poacher’s house. This is a significant deterrent : the poacher knows that nothing he can do will be able to change this. The Maasai in particular are terrified of trackers dogs, regarding them as somehow supernatural in their ability to track them down.

The last four months have been frustrating while our ranger teams were working without the back-up of tracker dogs. There have been two elephant poaching cases, where we were able to follow the poachers' tracks until they reached the outskirts of villages, where unfortunately, movement of people and livestock caused the tracks to be lost. As it turned out, we were later able to identify and arrest the poachers through informers, but by which time the ivory was sold.

By contrast, I remember one case a few years ago when our bloodhounds were called in to follow up a poaching case after the rangers lost the tracks when they entered a small town. The dogs, despite being about eight hours behind the scent, led the scouts through the town of about one thousand people to a hut on the outskirts. So confident of the dog that the rangers did not even attempt to knock, they forced open the door, to find the poachers with all the evidence required for a prosecution.

Probably the most outstanding follow-up we had was when a patrol team found a rhino trail littered with cable snares, set the day before. The ground in the area was mainly lava rock, and so impossible for conventional tracking that the dogs were bought in. Four hours later, the dogs led the rangers out of the park to a small hut on a farm. On searching the hut, the rangers found more snares, poisoned arrows and a gin trap. How many animals this single operation saved is impossible to determine.

In March of this year, thanks to the incredibly generous donation from the Benindi Fund in the UK, Big Life Foundation purchased four tracker dogs, two for the Kenyan side, two for the Tanzanian side. These dogs were selected from kennels in Czechoslovakia, and were trained by Canine Specialist Services International, which are based in Northern Tanzania. German Shepherd were chosen over Bloodhounds, as they have more stamina and can handle the heat better. After six months training in Northern Tanzania, the dogs were ready for action.

A two-car convey left Tanzania on Sunday morning, headed for Kenya. On board were six excited Big Life rangers who had been away from home for two months, upgrading their skills as tracker dog handlers. With them were two German Shepherds, Max and and Jazz, their first trip out of boot camp where they had finally graduated from the 18-month course in Man Tracking....they even had certificates to prove it.

John Magembe, Big Life's field commander on the Tanzanian side, and with 17 years of anti-poaching under his belt, led the convoy. He was probably more excited than anyone, as finally, he had another weapon in his anti-poaching armory to put to use immediately.

At each village, John deliberately had the convoy stop at the villages' local tea shop. The rangers ordered tea, and water for the dogs. Before either could be served, they were surrounded by inquisitive crowds wanting to know what was going on. I would loved to have been a fly on the wall, but can only imagine what John and the trackers told of what the dogs were being brought to do, and what they could do. But from what I hear, it was anything from being able to smell poached ivory from 5 miles away, to following a man's scent across dry dusty ground one month after he passed. Nothing wrong with a bit of exaggeration, but the message would have moved fast as in all rural communities.

John and I met on a salt pan on the Amboseli lake bed where I had landed my Cessna 206. The column drove up in a spiral of dust and the trackers jumped out, beaming smiles, a combination of being home again, pride at passing out of their tracking/dog handling course, and bringing home their anti-poaching dogs. I have been owned by dogs all my life, and worked with blood hound tracker dogs for five years, but I have to admit that I had a few seconds of panic as Max was let out of his travelling crate. With his ears pricked up, those yellow predator eyes locked on, and he came towards me in bounds, straining at his lead. I resisted the reaction to run and held out my hand, which he sniffed before jumping up and wrapping his front paws around my shoulders in a macho hug.

I had the not-so-bright idea of taking photos of the dogs and the handlers on the wing of the plane. We got some photos, but Jazz then decided he could get down without any help. He slipped down the windscreen, leaving furrows where his claws gripped on, adding yet more scars on the trusty old Cessna's conservation flying career. But I know that as I fly, I will look on those scars with affection, for they will remind me of the day when Max and Jazz arrived. 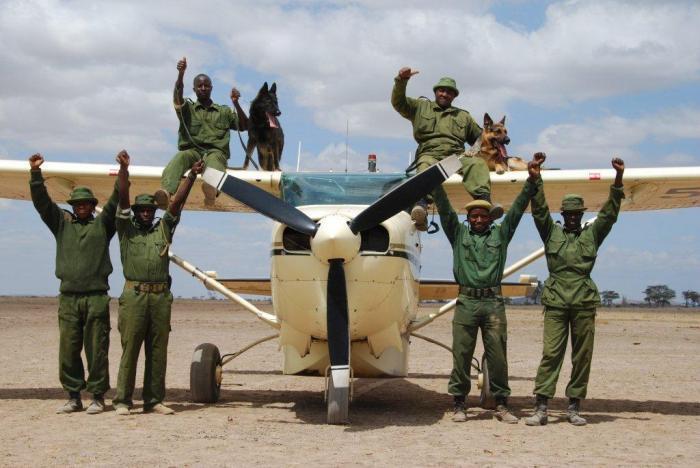