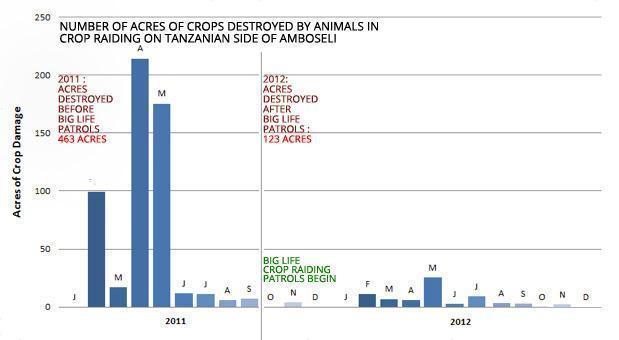 Every year within the Amboseli ecosystem, elephants raiding crops are speared and killed by farmers. The number of deaths is second only to those killed due to poaching.

For as the human population continues to grow by the year, so farmland spreads further and further into what was formerly wildlife habitat.

But imagine that you are a poor farmer and your livelihood is the few acres of maize that you’ve planted. And then one night, an elephant herd raids your fields. Within a few minutes, the elephants destroy not only a season's work and investment, but effectively remove the very food off the family table. You have a spear, and panicked and frustrated, you use it. The result, a badly wounded or dead elephant.

Every night, 2-3 Big Life vehicles with rangers patrol on both sides of the Kenyan and Tanzanian borders on the lookout for elephants raiding crops. During wet season, around 500 thunder flashes a month - noisy harmless pyrotechnics - are utilized to scare the elephants out of the farms. Many thunder flashes are also handed out to the region’s farmers, as of course the Big Life patrols cannot possibly be everywhere at once. ‘Chili grenades’ are also often used, which are made out of chili powder that irritates the elephants to the point of being a deterrent.

The chart above shows just how effective in one year the teams have been on the Tanzanian side. Since Big Life started crop raiding patrols, there has been a 73% drop in acres of destroyed fields. That means a lot less frustrated angry farmers ready to spear an elephant to protect their crops.

However, the only long term solution is to create effective barriers through electric fencing. But the costs are so high, it is unaffordable for farmers, and so far, we have been unable to raise the hundreds of thousands of dollars required for fencing.

Hopefully, we will eventually find the funds for such a fence, that both keeps the elephants out, and prevents the farmland from spreading even further into wildlife habitat.

Until then, the Big Life rangers will continue to patrol the farmland borders, helping both the farmers and the elephants live together.