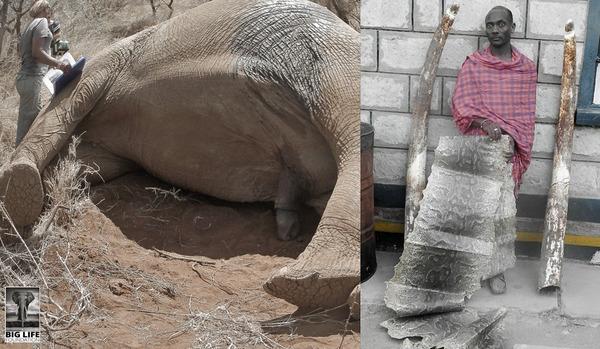 Late last year, Big Life rangers followed tracks from the bloody carcass of a poached elephant. At the end of these tracks, they found Kerumpoti Leyian, with the elephant’s tusks and a python skin.

He was arrested but granted bail. Following a series of preliminary hearings, his final court date was set for June this year. Come the day, Kerumpoti was nowhere to be found, he had gone on the run. This was a huge setback for us: nothing jars like seeing our hard work come to nothing.

We monitored his home for some time but he did not return. But we did not give up. Patiently, we put out some feelers. And waited. Eventually, nearly two months later, the news that we were waiting for: Kerumpoti was back in the area, but sleeping in another home.

In the late afternoon of Saturday one of our teams came together with a team from Kenya Wildlife Service, and sat down to wait through the night. In the early hours of the morning, the rangers quietly surrounded the home.

At a signal the men moved in as onei. The operation went exactly as planned, and the elephant killer had no idea what had hit him. He is now back in police custody, no bail this time.

This is a huge boost for us; as well as bringing justice to a known poacher, we are showing would-be poachers that there is no escape. There was nothing sexy or hi-tech behind this operation, just good old-fashioned human connections and intelligence gathering. This is how we operate, and it is working.