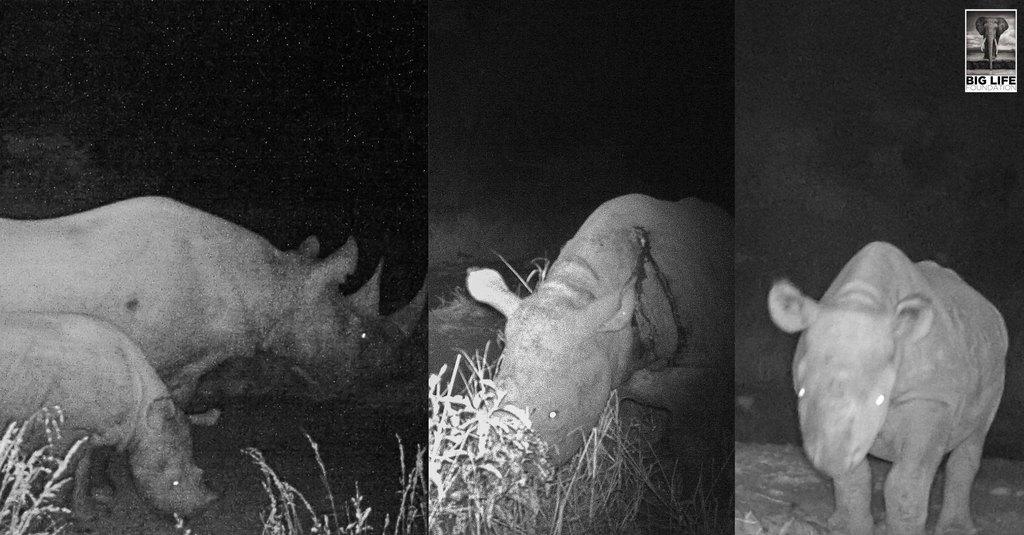 On the 5th of June last year, poachers gunned down a female rhino in the Chyulu Hills National Park (pictured with her calf on the left). Her calf was only 13 months at the time, and nowhere to be seen after the shooting, but a telling blood trail indicated that he too had been hit. At this age, he was unweaned and totally reliant on his mother.

Camera trap photos showed that he had taken an AK-47 rifle slug through the neck (photo in the middle). Working with the Kenya Wildlife Service, we did everything we could to catch him. But, already traumatised from his ordeal, he outwitted helicopters and the rangers working round the clock to locate him. Eventually he disappeared. We had to give up, and assume that nature had taken its course.

Months have gone by without any sign of him, and then, last month we were elated when he reappeared on a camera trap (pictured right)! He looks ok, the wound has healed and his condition shows that he has defied the odds and eked out an existence without his mothers milk. He is not out of the woods yet, but over the worst. He should now be able to defend himself against hyena and other enemies of his world.

That is a battle he has to fight, but as his horns continue to grow other enemies will have him in their sights. Poachers who will try to do to him what they did to his mother. This is our battle… let us hope his luck lasts and we are able to provide him with the protection he deserves.