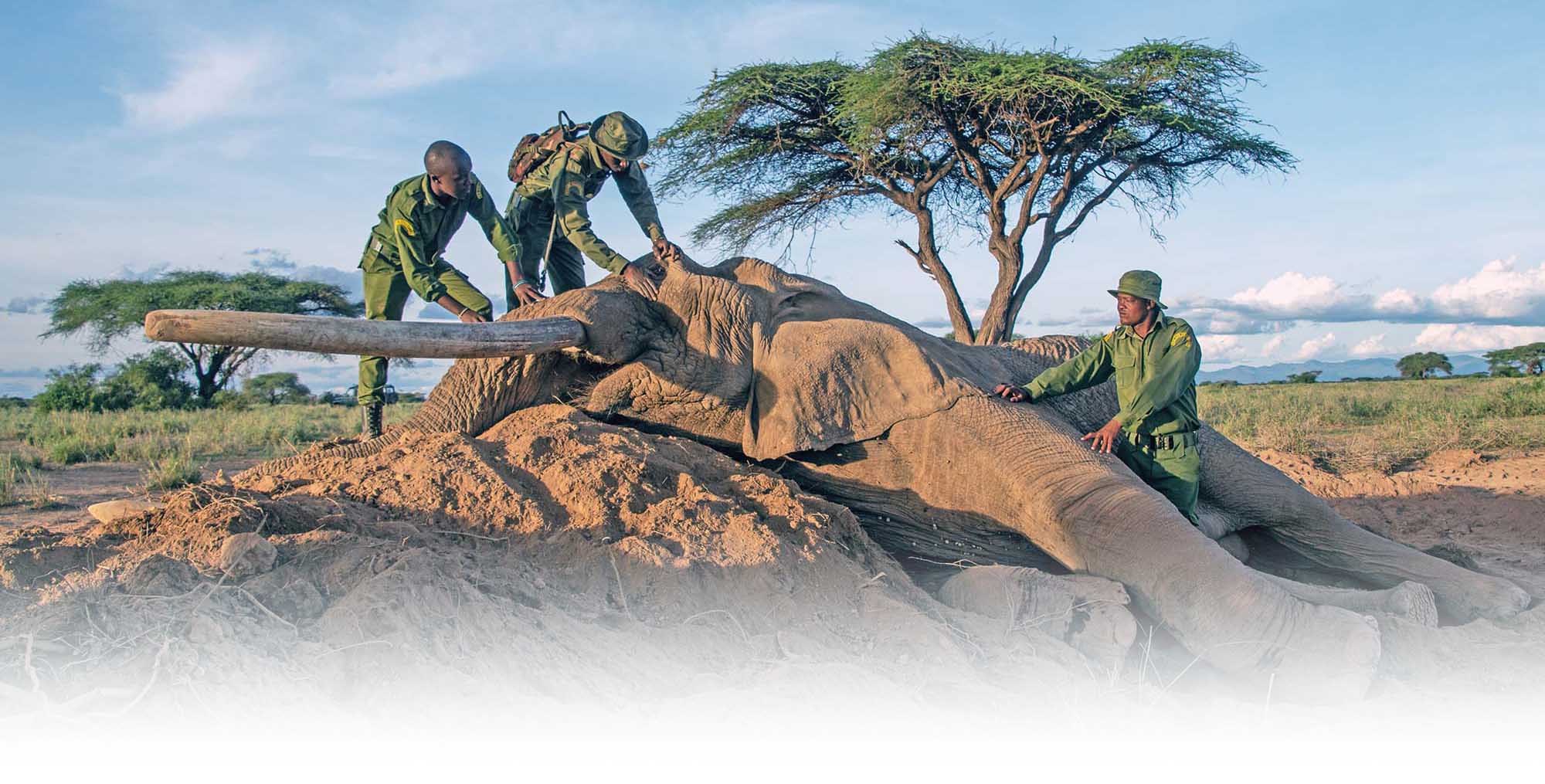 THE PRICE OF PEACE

We will never know what happened that night.

Even those who were involved probably don’t. But we can imagine how it unfolded.

It was late, completely dark but for the sporadic pools of light cast by small fires. To an outsider, it would have been a peaceful scene, but the men sitting around the flames were on edge.

The reason for their unease eventually emerged from the darkness.

The footsteps were silent, but the actions were not. ELEPHANTS. They started to crunch their way through the maize field, sending a jolt through the farmers who were close enough to hear them. Chaos broke out.

The men ran at the shapes, screaming, shouting, and banging pots. Torches and burning sticks flashed through the air. Amid the mayhem, someone threw a spear.

The next day, a Big Life ranger unit on patrol made a worrying discovery. Tolstoy, one of Africa’s biggest tusker elephants, was limping. He had a spear-wound in his leg.

Six weeks later, Tolstoy is dead, his huge body eventually overwhelmed by an infection and related complications from the wound. 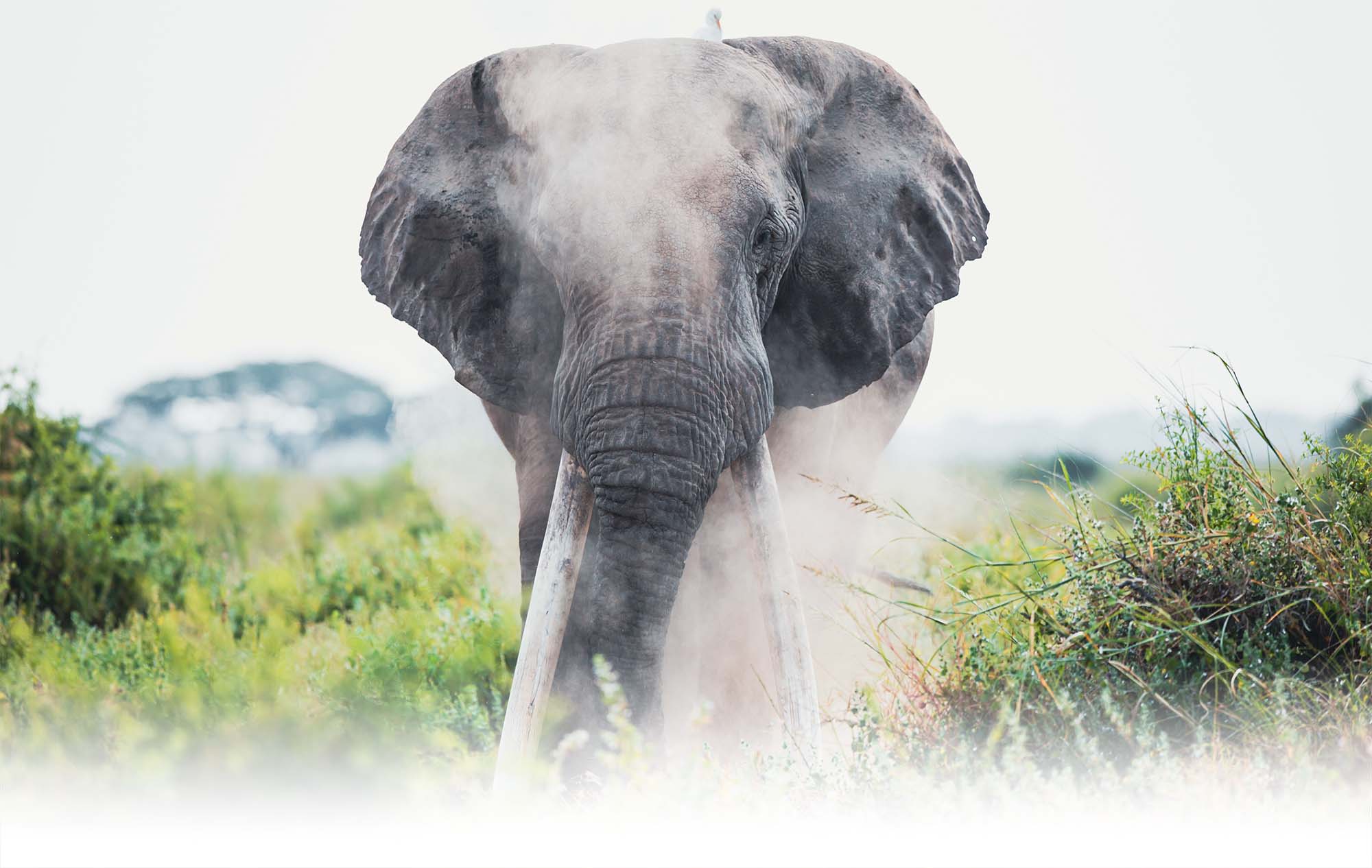 Tolstoy was one of Amboseli’s treasures. There are perhaps as few as thirty elephants like him alive.

‘Super-tuskers’ are elephants that have at least one tusk weighing 100 pounds or more. The genes that give rise to these incredible creatures are gone from most of Africa, systematically eliminated by hunting and poaching pressure. Most of the super-tuskers that have survived live in the Greater Amboseli-Tsavo ecosystem.

Tolstoy’s huge tusks put him at tremendous risk through the worst of the ivory poaching years. Big Life’s rangers worked hard to protect him through that dark time, and to lose him, at age 51, to human-wildlife conflict was both tragic and a shock.

Tolstoy never meant any harm, and you can be sure that the person who killed him would rather have been asleep in his bed at home than throwing spears at elephants in his field. The farmer probably didn’t even know that it was Tolstoy in the darkness.

If anything, this makes his death even more pointless and upsetting, especially for the rangers who have spent years of long nights patrolling the farmlands that Tolstoy frequented, doing their best to keep him and other elephants out.

Human-wildlife conflict is a battle in which there is no winner, only losses on both sides. Big Life’s job is to minimize those losses, and to help keep the peace.

In the five years from 2012 to 2016, we recorded thirty-six conflict-related elephant deaths in our core area of operation. Something needed to be done, and in 2016, you—our supporters—gave us the funds to start construction of a solar-powered electric fence, a barrier to separate elephants from humans and their crops.

Today that fence is 100 km long and has achieved exactly what we had hoped. In the last three years, we have lost only six elephants to conflict in our core area, and because of the fence, only two of those were in retaliation for crop-raiding.

The reason is simple: the fence has reduced crop-raiding by more than 90% in the areas where it has been installed. This fence helps elephants, and it helps people. The map below shows how effectively it has prevented three collared elephants from entering farmlands 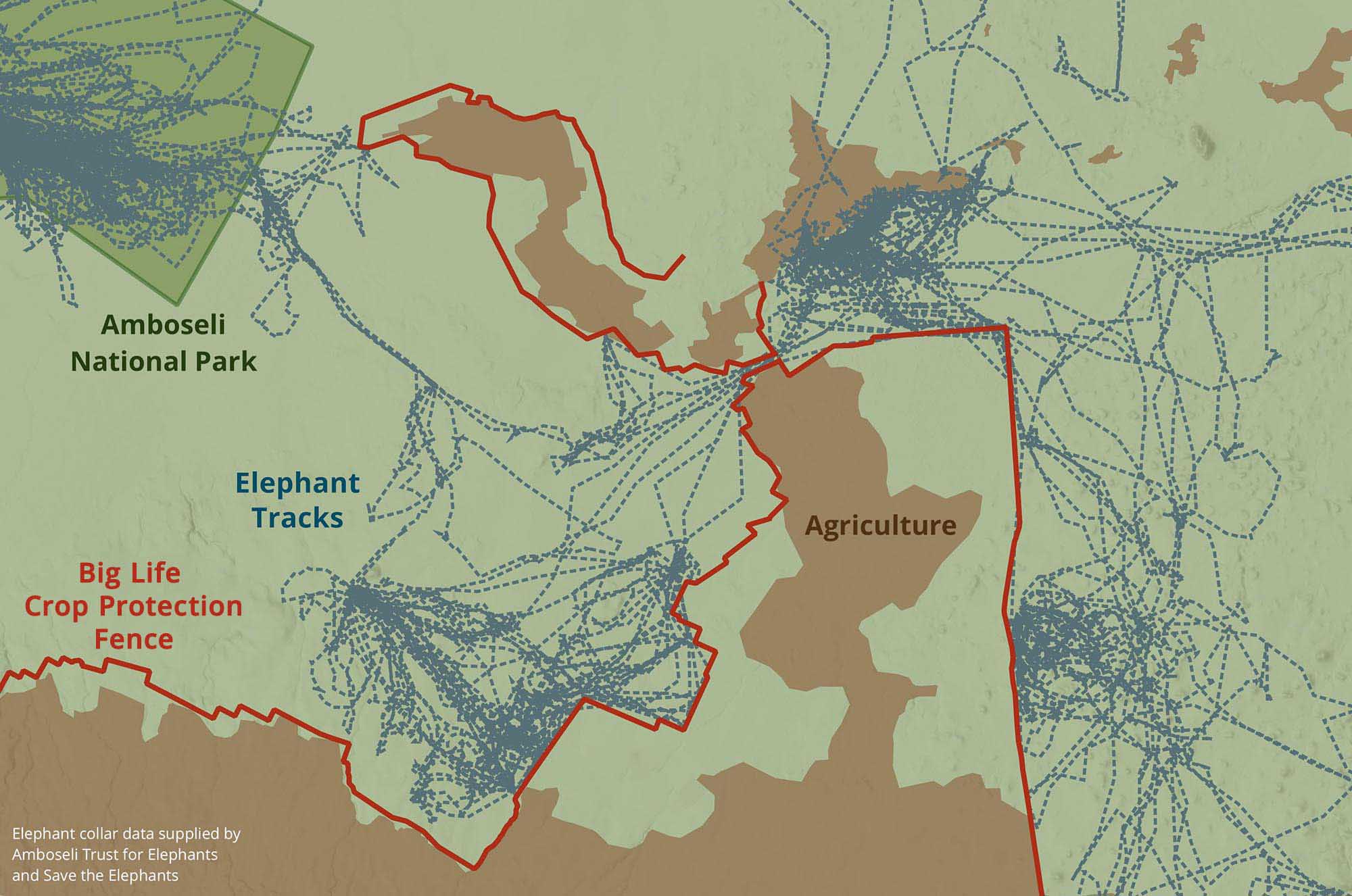 But a fence is not impenetrable. Elephants are extremely smart and will exploit the smallest weakness in any barrier. At the worst times of year, there are multiple elephant attempts to break the fence each night, and the difference between success and failure is maintenance.

Big Life employs a team of thirty-three fence-checkers to do exactly this. They walk every inch of the fence daily, checking for problems and patching breaks. They are as much a part of a working fence as the electrified wires themselves.

So, the fence has been successful. Why then, you might ask, is Tolstoy dead?

We aren’t able to build crop-protection fences along boundaries that are likely to change in the future. Sadly, Tolstoy was a habitual crop-raider in an area where land ownership and boundaries are currently in flux, and so this area has remained unfenced.

As many of you know, the Greater Amboseli ecosystem is currently going through a process called land subdivision. Large communally-owned land areas are being divided into small privately- owned parcels. This will define the boundaries of agriculture across the ecosystem. Once these future boundaries have been established then we can continue the fence-building.

In the meantime, Big Life’s rangers need to fill in the gaps. Big Life has six vehicle-based mobile ranger units spread across the ecosystem. These rangers spend their nights on call, ready to respond to elephant crop-raids at a moment’s notice. They are the peacekeepers, and it is thanks to their extraordinary commitment and work that Tolstoy lived for much longer than he otherwise would have.

We are going into a difficult time now. The long rains failed this year, and human-wildlife conflict will be particularly intense over the coming six months before the rains return.

We need to do two things to keep the peace in Amboseli.

We need to keep the fence maintained and working. The costs of this include salaries, rations, and protective clothing for the thirty-three fence-checkers, and materials for fence repairs.

We also need to keep Big Life’s rapid-response ranger teams in the field, in areas not yet protected by the fence. Vehicle running is funded by existing grants, and so support is needed for salaries, rations, and equipment for the 55 rangers.

Tolstoy’s death leaves a huge hole in our world here. But there are many others who may grow to his astonishing size if protected, some of which are likely Tolstoy’s offspring.

Please support our rangers and fence teams to give them this protection.